Chris Golde and Bridget Whearty are the co-editors of this project. We met commuting on Caltrain to the Stanford campus, where Bridget was a first-year grad student and Chris was working as a graduate dean. We soon discovered that we both had dogs named 'Liam.' After this initial slightly-strange bonding moment, we quickly discovered that we share a lot of values around graduate education, diversity in the academy, and maintaining healthy work-life balance--particularly when it involves eating well.

The "Survive Grad School Essay Project" was born when Bridget remarked, "So much of what I need to be successful in school, I learned waiting tables." We created this project to collect and share stories about how the skills grad students bring with them are often the tools that build success—​in and beyond the academy. 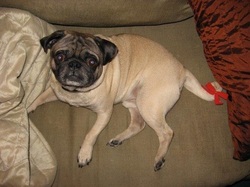 I am Assistant Professor of Medieval Studies and Digital Humanities at Binghamton University in the SUNY-system. I completed my doctorate at Stanford University in 2013, where I was a Diversifying Academia, Recruiting Excellence (DARE) Fellow from 2011-2013. From 2013-2015 I was a Council on Libraries and Information Resources (CLIR) Postdoctoral Fellow in Data Curation for Medieval Studies, also at Stanford.

I research and teach medieval and early modern literature and culture, the history of the book, and the digital humanities. I'm working on my first book, The Digital Resurrection of Medieval Manuscripts. I'm also the translator behind @Monk_of_Bury, a 7-year Twitter project adapting the medieval English poet John Lydgate's masterwork The Fall of Princes (one of the longest poems English) for modern micro-blogging, accompanied with digital-medieval manuscript images. My essay for our project is here.

This is my Liam. He's a much-loved and increasingly-crotchety pug. 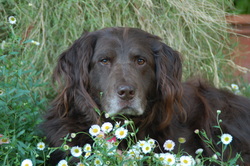 I work at Stanford University, in the office of the Vice Provost for Graduate Education. For eight years I was Associate Vice Provost, in late 2015 I moved to a part-time role. I received my PhD in Education in 1996 from Stanford. My dissertation topic was doctoral student attrition. One of the things I am proudest of in my job is that I help coordinate the DARE Doctoral Fellowship Program. DARE (Diversifying Academia, Recruiting Excellence) helps Stanford doctoral students whose presence will diversify the professoriate.

For most of my post-grad school career, I have defined myself as a researcher and writer about the doctoral student experience, across many disciplines. While at the Carnegie Foundation for the Advancement of Teaching, I was a co-author of The Formation of Scholars, co-editor of Envisioning the Future of Doctoral Education, both books from the Carnegie Initiative on the Doctorate. Tim Dore, a chemist and friend from grad school, and I collaborated on a national study on the doctoral student experience, funded by The Pew Charitable Trusts.  The report, "At Cross Purposes," was published in 2001.

The photo is my Liam.  He was a Springer Spaniel - Gordon setter mix. We said farewell in February, 2013.

How to reach us

Use the contact form on the Tell Me More page, or email us at survive.gradschool.book at gmail dot com.